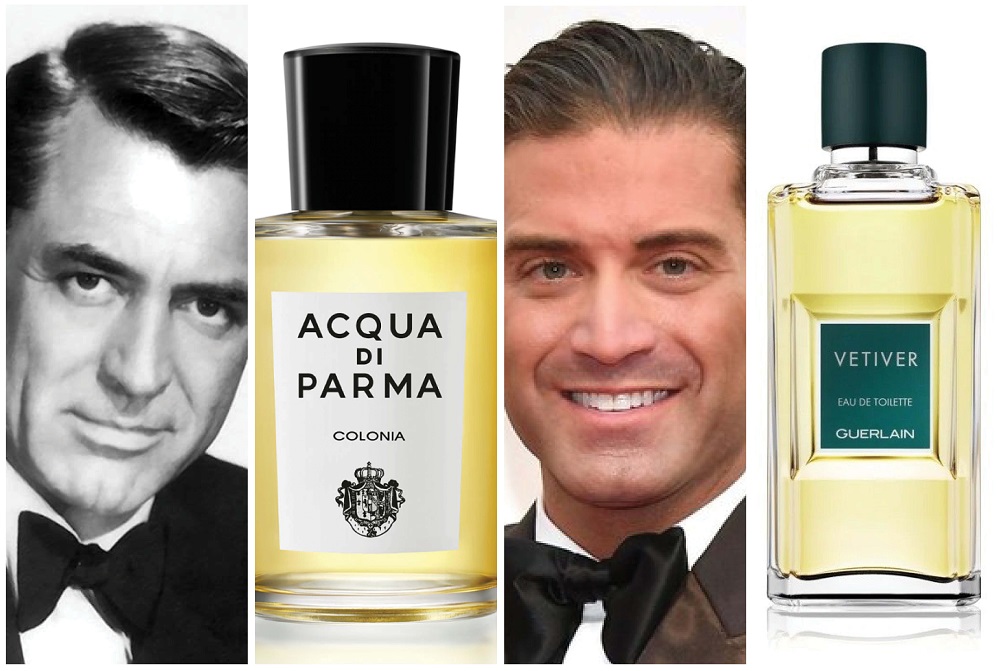 “Manners and a good cologne is what transforms the man into a gentleman,” said Tom Ford, arguably the world’s smoothest man. After last week’s post on fabulous women and their scents we thought you might just be interested enough to know the scents some of our favorite men from the past and today are sporting.  From Hollywood’s Golden Age style icons  to today’s trendsetters in the Arab world.

The epitome of a gentleman in Hollywood’s Golden Era, silver screen legend Cary Grant was a devotee of the signature Acqua di Parma Colonia, often referred to as ADP by those in the know. The mix of lavender, jasmine and light musk evokes the smell of an Italian garden. 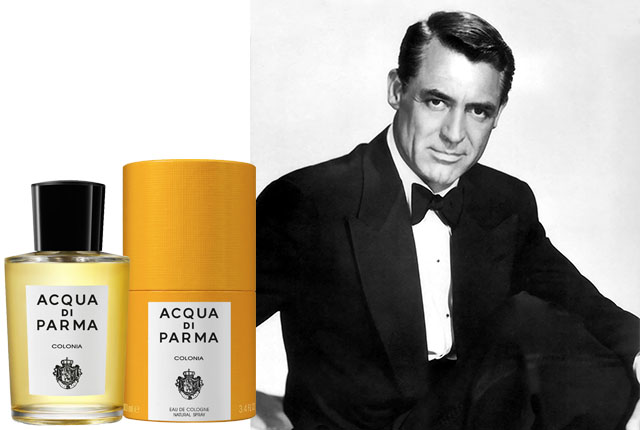 John F.Kennedy’s signature scent Eight & Bob was created for him back in in 1937 when he asked Parisian amateur perfumer Albert Fouquet to send him 8 samples of perfume and one for his brother Bob. The scent mixes woody notes with violet, iris and sandalwood. 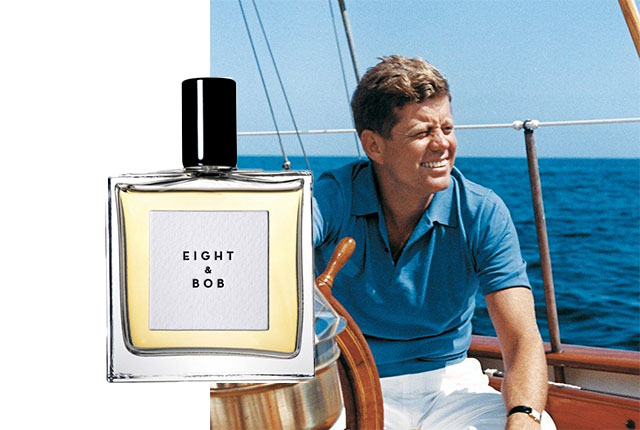 Take Pour Un Homme De Caron released in 1934 was the first  eau de toilette for men. A fan of the blend of  lavender and vanilla was no other than Hollywood “bad boy” James Dean, an idol and style icon to millions of young people around the world. 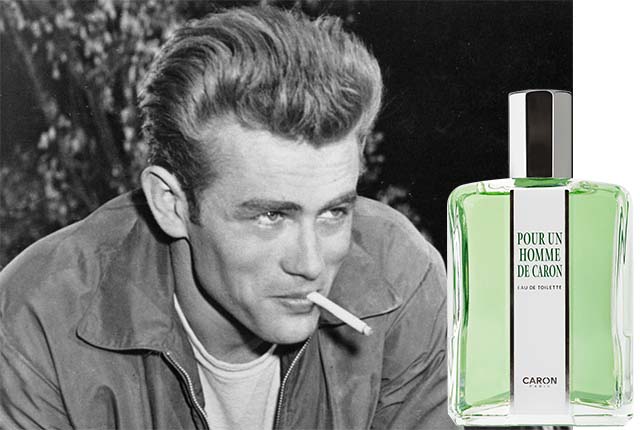 When in 1959 Guerlain  launched its first men’s fragrance, Guerlain Vetiver it became an instant hit. The blend of fruity freshness and smoky vetiver attracted no less than Britain’s style icon of the 60’s, actor Michael Cane. 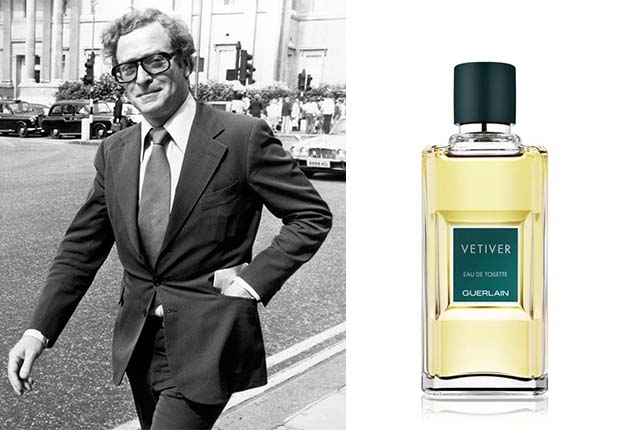 Give it to the Candyman, Sammy Davis Jr., the coolest of the legendary “Rat Pack” that reigned over Hollywood and Las Vegas, to splash on Aramis. Launched in 1964 the fragrance is a masculine blend of spicy cinnamon, vetiver and leather. 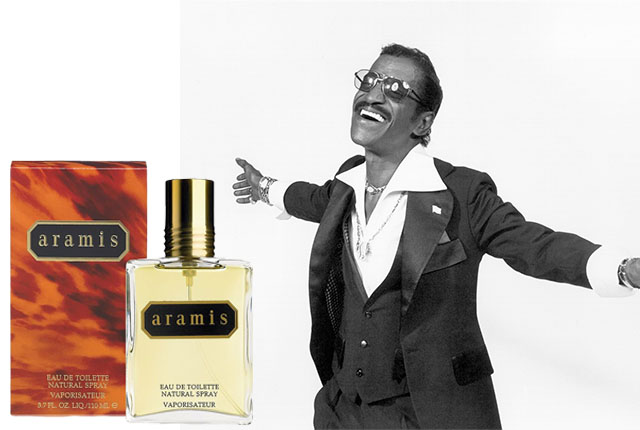 Time to find out what the trendsetters and  style icons of the Arab world fancy as their favorite scent:

Kuwait’s jet setting prince is a fixture on the international fashion circle. Seen front-row at major fashion shows in customized designer  suits or the traditional thob, his favorite scent is Burberry Baby Touch that he discovered after Bulgari Baby was discontinued.  As the name suggests, this unisex fragrance is super light and discreet, as fit for a prince,  and combines notes of orange blossom, jasmine and vanilla. 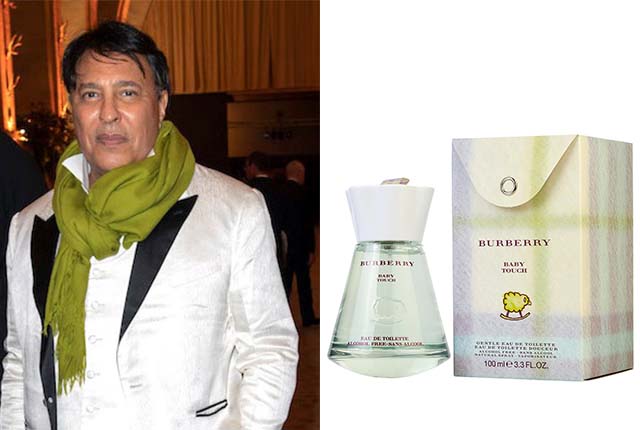 The always impeccably dressed and groomed Dubai based Syrian designer confided that he has been hooked for several years on Aqua Universalis by Francis Kurdajian , a very fresh, light and summer fragrance he sports for day. As night sets in he opts for French Lover by Frederic Malle which he describes as a very distinguished scent with a strong character and a nostalgic twist. Lately he also discovered the very light and fresh Misk Begum by Tola, a beautiful perfume house in the Emirates that specializes in local charismatic aroma. 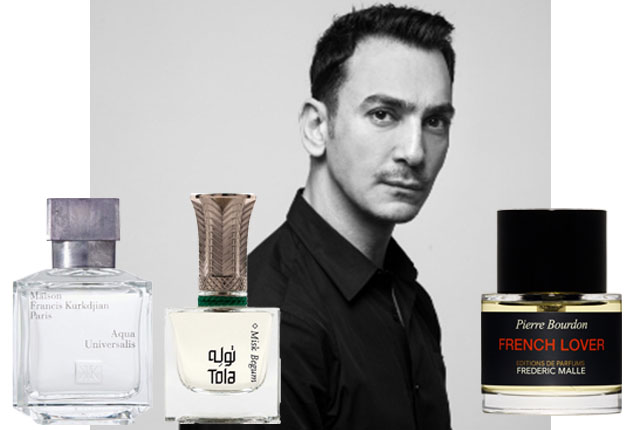 The globe-trotting Saudi-German businessman is also a true fashion icon. The life of every party, you will always find him dressed in one of his custom-made thobs accessorized with traditional bead necklaces.

“As a fragrance enthusiast my taste is somewhat eclectic ranging from legendary parfumeurs Maitre Parfumeur et Gantier’s Or des Indes  and Hermes’ Un Jardin Sur Le Nil to scents from more recent lifestyle brands such as Montroi’s White Qasbah, Hanami and Bosphorous to lesser known names such as  Emir Wood.  Daytime favorites are citrusy, lighter scents that evoke days at the beach. Sunset and evening bring forth the more headier base notes such as musk, sandalwood and cedar wood.  My late father used to create his own scents for personal use. As a result I use several favorites to create a distinct and memorable signature fragrance.” 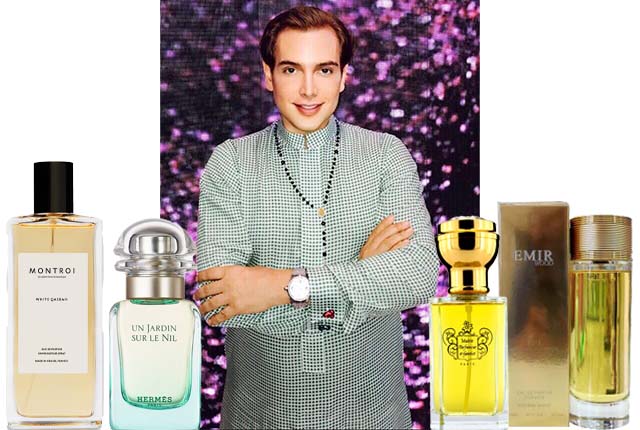 The Egyptian-Swiss Marangoni graduate who worked at Moschino for three years in Milan before moving back home, opened his atelier in Cairo in 2004. Since than he has been dressing Egyptian celebrities and socialites with evening wear for the red carpet and big occasions. He has been loyal to Terre d’Hermes for 16 years.

“ It suits my personality. Classic mixed with extravagance, yet different and fierce.” 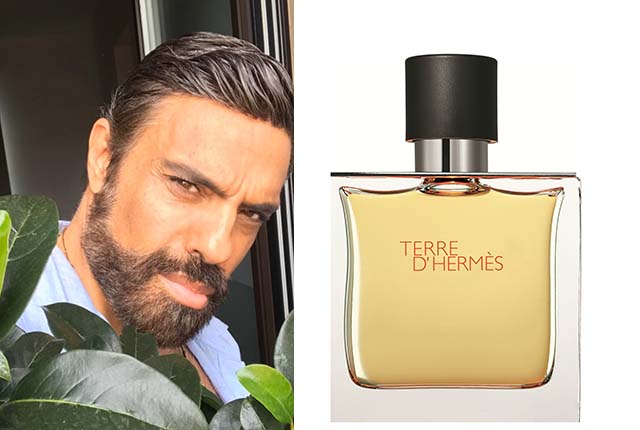 The Lebanese stylist who recently launched his own fashion label Boyfriend The Brand,  is known for his great taste. He not only styles young style icons of the likes of Lara Scandar, but his services have been summoned by international fashion power houses to dress celebrities. A fan of Dior ready-to-wear, it might be no surprise that his signature scent is Higher by Dior.

“ I was on a trip in Paris in 2001 with my dad and I dragged him into the Dior boutique on Avenue Montaigne. That’s were we saw that they had just launched a day earlier a new fragrance for men called Higher.  The minute I smelled it, I loved it. And since that day, it has been the only scent I wear.” 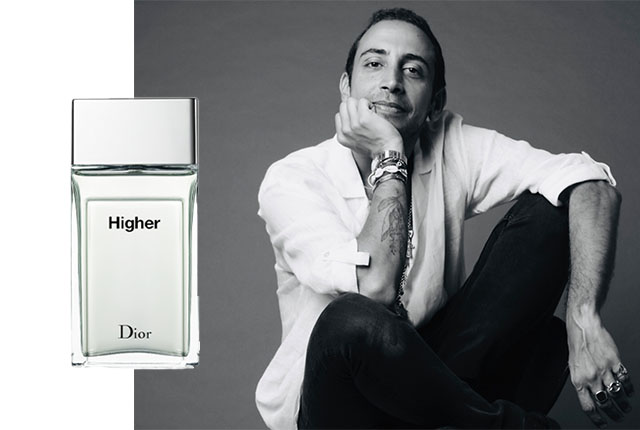 Synonymous with Toby, his fashion brand that dresses the Gulf’s elite in perfectly tailored thobs with a twist, the Saudi designer himself is an aesthete when it comes to dressing up. Well groomed from head to toe the final touch comes with a splash of Aqua di Parma or Dior Sport for day and Dior Homme or Tuscan Leather by Tom Ford for night.

“During the day I much prefer fresh citrus scents and for evenings warmer scents. I am also a believer that summer scents should be more fresh and lighter than winter scents. In this time of quarantine it’s important to pamper ourselves with the scents that remind us of the best of times. Break your days and elevate your mood with a more fragrant evening or afternoon. After all the strongest sense of memory is your sense of smell.” 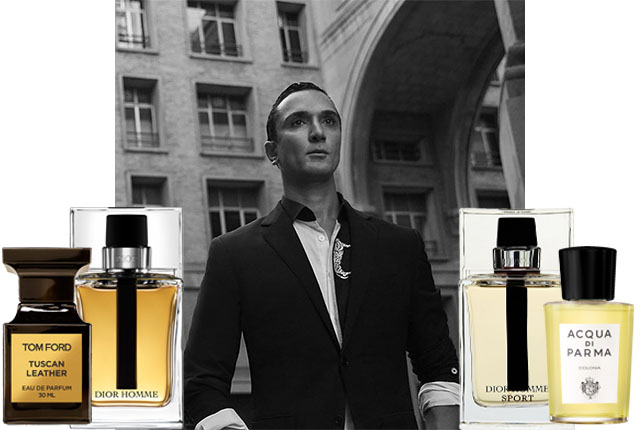 A fan of Toby himself, the Egyptian/Canadian actor who lives in L.A. has not only inherited his late grand-father’s smashing looks and charm but also his sense of style. From gym-wear to tux topped with his signature scent, Happy by Clinique, he sure cuts a perfect figure as you will discover when you follow him on his instagram account.

“I’ve only worn Happy by Clinique since I was 15 years old. It’s such a fresh scent that immediately puts a smile on my face. It smells like a summertime picnic in a bottle. It’s not easy to find a scent that is simultaneously sweet and still masculine. I’ll never switch!” 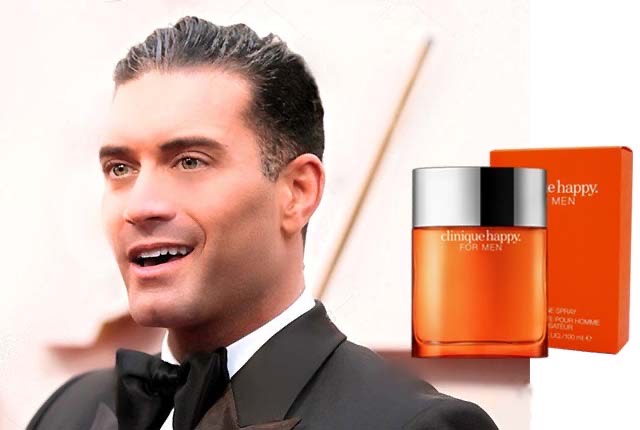 Famous Egyptian actor and former TV presenter of famous MBC shows ET bel Arabi and the X-Factor, is not only swell to look at on the screen but also in real life. He confessed that his two signature scents are Bleu de Chanel  and Dior Fahrenheit, yet when he is in the mood for a change he prefers fruity scents.

“My father used to wear Dior Fahrenheit all the time, this is why I’m addicted to its scent. It has a special place in my heart as it always reminds me of my dad.” 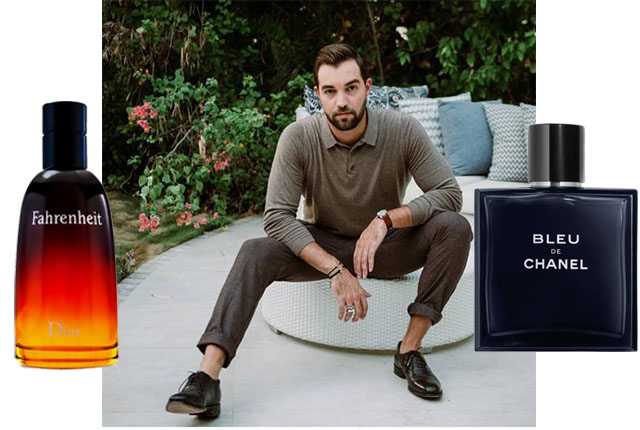 Egyptian businessman Karim Naggar, whose wife Karine Fahmy is a fashion and beauty authority in her own right, is known to be one of Egypt’s best dressed men and not one to shy away with experimenting with new trends.  His signature scent is Miracle of the Rose by Prada.

“I never had a particular scent I stuck to. I had many and wore them according to my moods and time of the day. Until a couple of years ago I was at the Prada boutique in Paris on Avenue Montaigne and discovered Miracle of the Rose. Men see it as too feminine. Women see it as too masculine! That’s why I love it!” 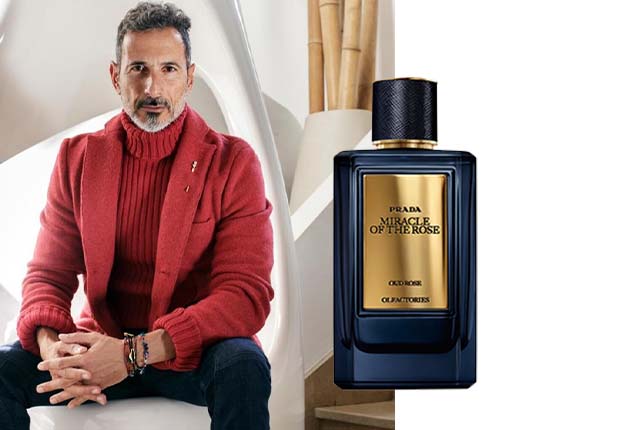 The super-stylish Palestinian entrepreneur and man behind WhatUsMenLike likes to keep incognito. A few years back he followed in his wife’s footsteps to discover his love for social media. Sharing his passion for fine watches and the beautiful things in life, without ever showing his face, has earned him over half a million followers.

“I’ve always felt that a man’s fragrance should distinguish his personality and that’s why I’ve been loyal to Angel by Thierry Mugler. I’m a morning person and a lover of the sea and the ocean. Angel’s fragrance feels like summer in a bowl for me.” 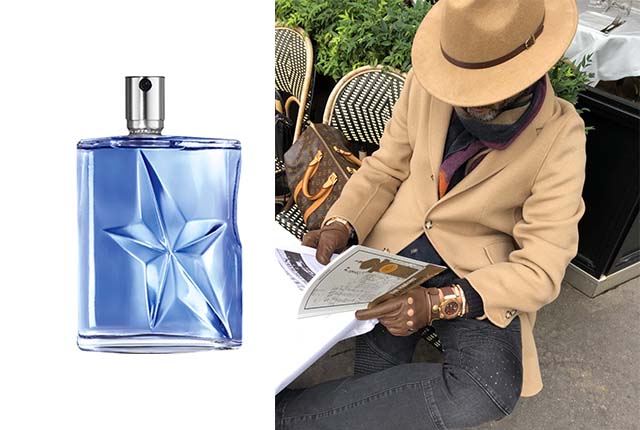 No fashion event in Dubai would be complete without the dandy like Palestinian, Dubai based founder of AMDmode.com, known as a resource for all aspects of a gentleman’s lifestyle, including fashion & travel. His favorite scent for almost 10 years now, is Bois d’Argent by Christian Dior Perfume

“The second I tried this scent I felt the connection. Perhaps the powdery touch in it, I feel it fits my skin perfectly and I feel it suits me really well.” 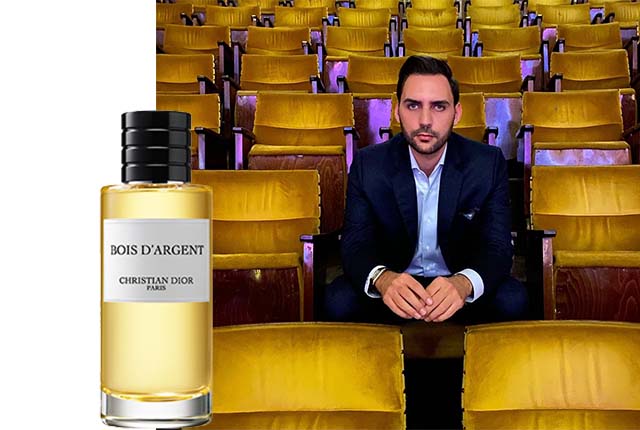 Last but certainly not least, the handsome Egyptian actor and screen writer confessed to us that he loves to wear Eau d’Issey by Issey Miyake. Nevertheless he is also a man of all seasons. For summer he favors Y by Yves Saint Laurent while in winter he prefers Orchid by Tom Ford and Gucci Oud. Yet he adds, he is also someone who is open to try new scents and explore the market. 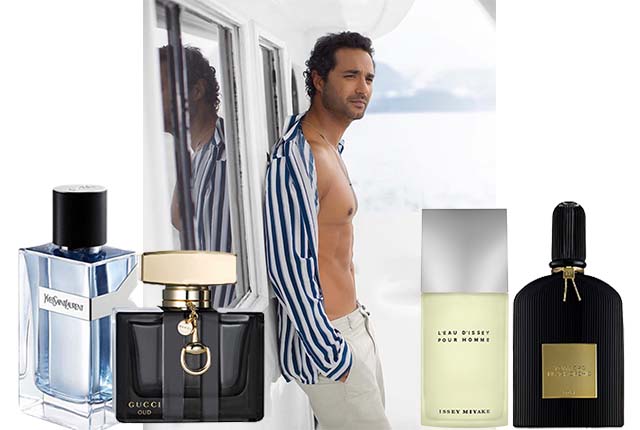