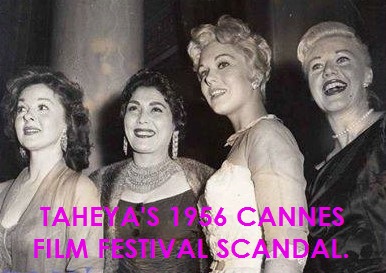 As the cancelled Cannes Film Festival 2020 should have been happening now as one the most glamorous film festivals of the year, we look back at one of the biggest scandals it witnessed throughout its 72 editions: the scandal of the 1956 edition when Egyptian belly dancer/movie star Taheya Carioca threw her shoe at Hollywood diva Susan Hayward. The shoe accidentally hit American actor Danny Kaye.

After Omar Sharif, Faten Hammama and Youssef Chahine who stepped out on the famous red carpet on the French Riviera in 1952 she was one of the first Arab stars whose movie was screened at the Festival. What promoted one of the most famous Egyptian movie stars who interesting to know was married 14 times, to throw a shoe at one of Hollywood’s biggest stars?

The story goes that during the gala dinner Taheya Carioca overheard Susan Hayward discussing the Israeli-Palestinian conflict and referring to Arabs as savage animals.  Feeling insulted, she threw her shoe at Susan Hayward but hit Danny Kaye instead. When the actor tried to defend Susan Hayward, Taheya Carioca then slapped him in the face.

The incident made headline news around the world and further cemented Taheya Carioca’s reputation of a woman with strong character.

Here a clip of Taheya’s  film ‘Shabab Imra’a’ (‘A Woman’s Youth’ or sometimes titled in English ‘The Leech’ ) that showed in Cannes.