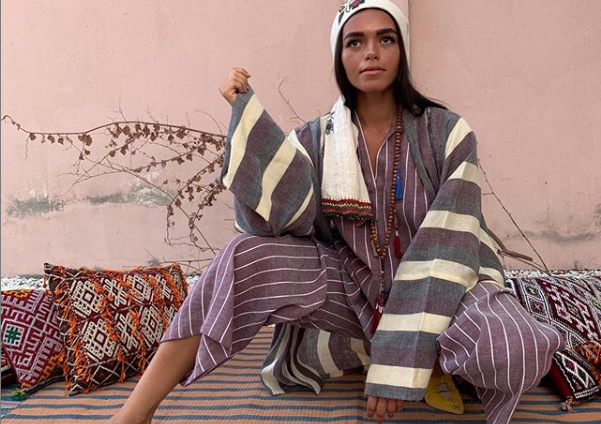 Multi-coloured Ikat, soothing washed silk, embroidered striped linen, vibrant tie-dye prints, and earthy monochromatic plaids– these are only some of the fabrics you will see worn around town made by the most trending designers in the Kingdom of Saudi Arabia. Contrary to popular belief, the black abaya has very little to do with Saudi heritage and traditional costume. In fact, it is a culture so rich in colourful embroidery and regional signature prints, you could mistake some of the fabrics for ones used by Kenzo or Paco Rabanne. With so much to be inspired by, it then becomes apparent that creativity, colour and vitality is inherent to Saudi identity with the veil of politics having masked it all along.

Just shy of seven years ago, I moved back to Jeddah, Saudi Arabia- a coastal city commonly compared to California in its geography and climate, yet dominated by a sea of black abayas instead of topless surfers. Wearing a navy abaya in a corporate setting was considered “provocative” and “attention-seeking”. Yet today, the classic black crepe “abaya material” is considered old-fashioned and outdated. A wave of self-expression and honouring your unique identity has flooded through, and the best medium to showcase this has been none other than fashion, specifically the abaya- our quotidian staple garment. Over the past seven years, the abayas have become more colourful, with less closures, shorter and much more practical; a piece that can easily be worn abroad in place of a light midi-jacket. They are seldom worn fully clipped up, but instead draped open over jeans and a tee, or a loose silhouette kaftan commonly paired with mules, sandals or sneakers. This is the biggest indicator that the fashion scene and social norms have indeed transformed, but perhaps social reform needed to take place first.

By taking steps to diversify and modernize the oil-based economy, Vision 2030 (released in 2016) has given birth to an era of innovation and creativity. 70% of the population is below 35 and their entrepreneurial spirit is infectious and thriving. Young creatives have been given a boost of confidence to make their creations public for their fellow young consumers who are hungry for new brands and unique pieces- an essential for the new cool.  The most sought-after products are no longer a limited-edition Chanel bag, but a Moja Majka tie dye kaftan, Lasuna loungers, a Nasiba Hafiz block-print dress, and an Arwa Al-Banawi slogan tee. These are only a few of the most popular Saudi Emerging designers, which have planted their seeds of growth in the regional market through their own showrooms or retailers such as Homegrown Market, a concept store that I created to serve as a platform for Arab designers to flourish.

In April 2016, the same week Vision 2030 was announced, Vogue Italia co-hosted a gala charity event alongside Rubayiat, the country’s leading luxury retailer, in an effort to showcase and support Saudi female fashion designers. Some of the winning names were Chador, Haal Inc, and Fyunka. With only one designer having studied at Parson’s New York, the other winners were educated at local design institutions. In April 2018, The Kingdom saw its first Arab Fashion Week where all the prominent figures in fashion jetted into Riyadh. From 80s-inspired designs to flowy silhouettes, power-women suits, and whimsical evening wear, many gems were unearthed. The roster that showcased inlcuded Mashael Al-Rajhi, jewel-toned evening wear by Razan Al-Azzouni, and chic modest wear by Sotra.

Fast forward to 2019, and here came the birth of the Ministry of Culture’s Fashion Commission created to cultivate, empower and elevate the new wave of fashion talent. They immediately launched Fashion Futures, the country’s first dedicated 3-day fashion event, where some of the biggest names in the international fashion industry such as Halima Aden, Iris Van Herpen and Giles Deacon, participated in talks, panels and workshops that touched upon the digital revolution, sustainability, and modest wear. It was an effort to encourage the dialogue between homegrown Saudi fashion talent and the international fashion industry; an international cultural exchange for Saudi talent to learn from the best in their field. Further efforts are being put into supporting local designers including strengthening local production capabilities to make “Made in KSA” a label of the highest quality.

With such bolstering support, it then seems inevitable that Saudi’s blossoming fashion industry will  make Riyadh a fashion capital. We are already seeing the trend of modest wear picking up worldwide with top fashion houses such as Dolce & Gabbana and Oscar de la Renta diversifying into making the abaya, hijab and introducing one-off Ramadan collections. The size of the market and purchasing power in the country is undeniable where many international brands have been rushing to strengthen their footing here. Combine this with the pride, inclination and eagerness of local consumers to support local budding designers and you are bound to see them triumph. This is definitely a space worth watching!