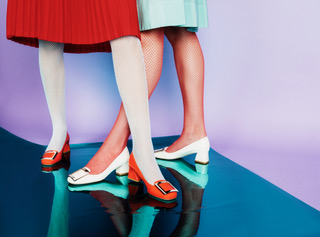 Arguably the everlasting symbol of Roger Vivier, the buckle signifies the eternal cycle of fashion. From Roger Vivier himself to today’s artistic director Gherardo Felloni, it has undergone many permutations, but never losing its distinctive elements, which makes it a Maison signature.

Celebrating over half a century of the iconic buckle let us look back at this amazing French fashion house born in 1937, known among many things for making the shoes HM Queen Elizabeth wore for her Coronation.  In 1942  Roger Vivier filed a patent for a shoe with a high heel and a large buckle at the throat that was to take the world by storm years later. In the 1960s, after creating haute couture shoes and inventions, such as the stiletto, Choc and Tibet heels, Vivier dedicated his time to more practical heel heights and shoe designs.

“In recent years, my aim has been to adapt couture fashion to a larger clientele,” he said. “In creating these models, I have thought of women who work and travel. Styles must be simple and refined.” Roger Vivier

Finally, in 1965, the iconic shoe was born inspired by the shoes of a marquis, from a time when buckles were seen as jewelry for the feet. Monsieur Vivier modernized the rectangular shape, making it more geometric. The shoe with an oversized Chrome plated buckle debuted during the Yves Saint Laurent fashion show, which showcased the famous Mondrian collection.

The shoes became the most in-demand footwear of that season and was forever immortalized two years later when French actress Catherine Deneuve wore a pair in the film “Belle de Jour.” It has since been known as the “Belle Vivier” – the Maison’s most iconic style, worn by the world’s most elegant women of that time, such as Jacqueline Kennedy, Hélène Rochas and Marlene Dietrich.

Through the years, the buckle has undergone many evolutions. Today, the Maison’s Creative Director, Gherardo Felloni, has taken the heritage of the past and has brought this into the 21st century. Inspired by the iconic “Belle Vivier” from the 1960s, Felloni created a new signature buckle for a collection of shoes and bags for a fitting tribute to the 55th anniversary of the buckle this year.